The Global Catechins Market size is expected to reach $18.1 Million by 2028, rising at a market growth of 4.7% CAGR during the forecast period.

A sort of secondary metabolite that plays an antioxidant role in plants, catechin is a flavan-3-ol. It belongs to the flavonoid subclass of polyphenols. Two benzene rings, the A- and B-rings, as well as a dihydropyran heterocycle along with a hydroxyl class on carbon, are found in catechin. The B-ring is comparable to a catechol moiety, whereas the A-ring is comparable to a resorcinol moiety. 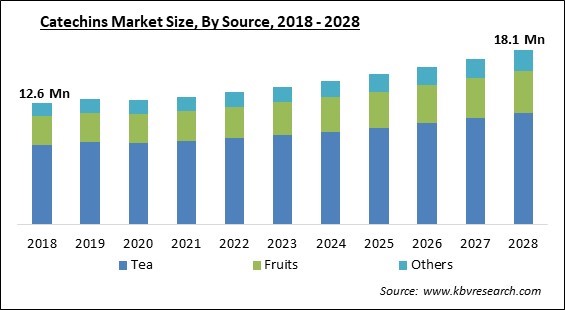 Catechin is a polyphenol that is widely distributed in green tea leaves. A growing number of consumers are adopting healthy lifestyles to lower their risk of developing cardiovascular illnesses and to treat obesity, which has led to the expanded use of catechin in the functional food and beverage sector. The market for functional beverages has expanded significantly over the last several years as a result of shifting customer attitudes on their eating habits.

The main factors influencing this transition are the changing consumer lifestyle, which includes excessive work hours and rising health hazards. New consumers would inevitably be attracted, especially non-core users, like recreational athletes and lifestyle users, as a result of the continued efforts to enhance the quality of all sports while taking the athletes' nutrition and training into account.

The rise in consumption of functional foods, which in addition to offering essential nourishment, have the potential to benefit health, has boosted the demand for catechins across the market. Moreover, the coronavirus infection was frequently linked with heart disorders. In order to prevent various heart-related issues, such as the risk of strokes, the demand for catechins was spurred by the pandemic. These factors propelled the growth of the catechins market during the pandemic.

The term green tea is well-known in weight loss diets and strategies. Green tea is an ingredient in countless diet aids and weight-loss dietary supplements. A number of dieticians as well as weight loss experts widely suggest green tea to their patients suffering from obesity or excess weight. It is simple to believe that drinking green tea to lose weight is a trend. But it is supported by scientific facts. Many fat-burning pills include green tea in their ingredients because it can increase metabolism and help people burn fat.

An Increase In The Cases Of Cancer All Over The World

Cases of cancer are increasingly rising all over the world and this disease is becoming one of the most lethal issues. According to the World Cancer Research Fund International, in 2020, there were 18,094,716 million new cancer cases reported across the world. In the same year, the combined age-standardized rate for all malignancies, excluding non-melanoma skin cancer, was 190 per 100,000. Men had a greater rate than women (206.9 per 100,000) (178.1 per 100,000). The burden of cancer is increasing in practically every nation, making prevention a critical public health concern.

Side-Effects Of The Excess Consumption Of Catechins

Catechins-included green tea is widely consumed. For the majority of people, moderate consumption is probably safe. When consumed for up to two years or applied as a mouthwash, green tea extract may be safe. It may not be safe to consume more of a particular quantity of green tea per day. Large amounts of drinking could have negative effects because of the caffeine and catechins included in it. Headache along with an irregular pulse are two of most common side effects, which can range in from minor to severe in terms of severity.

Based on Source, the Catechins Market is segmented into Tea, Fruits, and Others. In 2021, the tea segment acquired the largest revenue share of the catechin market. The growth of the segment is significantly rising due to growing consumer knowledge of the advantages of including green tea catechin in diet, like the treatment and prevention of obesity and diabetes. Moreover, due to its therapeutic and antioxidant characteristics, as well as its capacity to promote weight reduction and prevent and treat diseases including cancer, arthritis, and heart disease, among others, the segment is estimated to rise rapidly in the coming years.

On the basis of Type, the Catechins Market is segregated into Epigallocatechin (EGC), Epigallocatechin-3- Gallate (EGCG), and Others. In 2021, the Epigallocatechin (EGC) segment recorded a substantial revenue share of the catechins market. The growth of the segment is increasing because Epicatechins have demonstrated a range of advantages for human health, including lowering the risks of cardiovascular disease and diabetes. They have cytoprotective, antioxidative, anti-inflammatory, anticarcinogenic, and anti-hyperlipidemic pharmacological actions.

By Application, the Catechins Market is categorized into Pharmaceuticals, Food & Beverages, Dietary Supplements, Others. In 2021, the dietary supplements segment garnered a promising revenue share of the catechins market. Even when catechins are not mentioned on the product label, they are frequently present in several HDS that are linked to hepatotoxicity. They do serve to illustrate a few of the numerous difficulties and unknowns that surround attributing DILI to HDS. In various countries all over the world, herbal and dietary supplements (HDS) are frequently consumed.

Region-Wise, the Catechins Market is analyzed across North America, Europe, Asa-Pacific, and LAMEA. In 2021, Asia-Pacific held the largest revenue share of the catechins market. Catechin market demand is anticipated to be very high in Asia-Pacific. China is now the primary producer and user of catechins in the region. The demand for catechins in the Asia-Pacific region is anticipated to expand due to rising disposable income in China and rising consumer expenditure on functional foods and beverages.