The Global Cardiac Pacemaker Market Size is expected to reach $8.0 billion by 2024, globally, rising at a market growth of 6.8% CAGR during the forecast period.

What is Cardiac Pacemaker?

A Cardiac pacemaker is an electrical device and it is used to treat arrhythmias, which leads to irregular heartbeat. Arrhythmia is of two types, tachycardia and bradycardia. Heartbeat, when too fast, is tachycardia and when too slow, it is bradycardia. If the patient suffers from arrhythmia, the heart is weak to pump sufficient blood to the other parts of the body, leading to fatigue and fainting. As per the Disease Control and Prevention (CDC), deaths due to sudden cardiac are reported to be more than 600,000 per year, and almost 50% of patients die during first occurrence of cardiac arrest. The prevalence of atrial and ventricular arrhythmias grows with age and shows no sign of coronary heart disease.

Implantable cardiac pacemakers have been witnessing significant demand due to growing cases of slow heart rhythm and cardiac failures. Additionally, technological advancements such as development of MRI compatible pacemakers have further driven the growth of this segment.

What are the key influencing factors for Cardiac Pacemaker Market?

Cardiovascular (CVD) and circulatory diseases have been the leading causes for deaths, globally. The majority of these CVD deaths due to ischemic heart disease (IHD) or cerebrovascular disease. Understanding for CVD and its distribution has become vital for countries to develop national strategies, to reduce the burden of noncommunicable disease (NCD). The focus on NCD prevention and control, globally, was highlighted by the United Nations High Level Meeting on NCDs, in 2011. The member states voluntarily agreed to work towards reducing the risk of premature (defined by the World Health Organization as occurring from ages 30 to 70 years) death from NCDs, including CVD, cancer, chronic lung disease, and diabetes mellitus, by 25% by 2025.

Cardiovascular disease (CVD) has been a major cause for deaths in the United States. Heart attacks or strokes led to deaths in the recent years. CVD is considered to be a costliest chronic disease. Expenses associated with CVD would rise in the coming years. Based on prevalence, death rates, disability and cost, CVD would continue to be the most burdensome disease across the world.

What is the value of Cardiac Pacemaker Market Size? 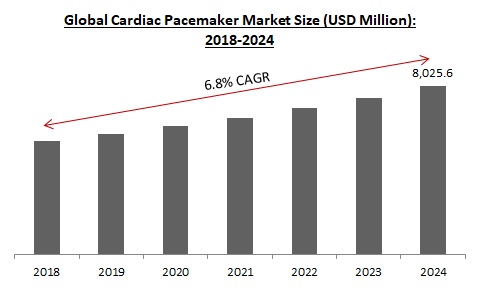 Asia Pacific is the fastest growing region, due to factors such as huge patient population, fast growing economies such as India and China, where the healthcare expenditures have been growing steadily, and rapid growth in the healthcare sector. Additionally, favorable government policies such as relaxation in customs and excise duty are other factors that drive the market growth in the region.

What are the major segments of Cardiac Pacemaker Market? 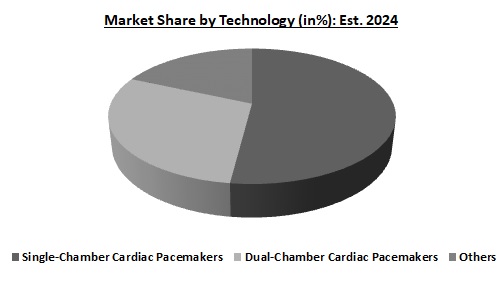