The Global Captive Power Generation Market size is expected to reach $691.4 billion by 2028, rising at a market growth of 5.2% CAGR during the forecast period.

A facility that generates energy used and operated by industrial or commercial energy customers for their own energy consumption is referred to as a captive power plant, sometimes known as a self-generating plant. It can run off the grid or be linked to the grid to exchange extra electricity. Usually, these are factories, large offices, or data centers. The capacity to export excess power to the nearby energy distribution network allows the facilities to operate in grid parallel mode. They might also be able to function in island mode, which would mean being independent of the local electrical distribution system. 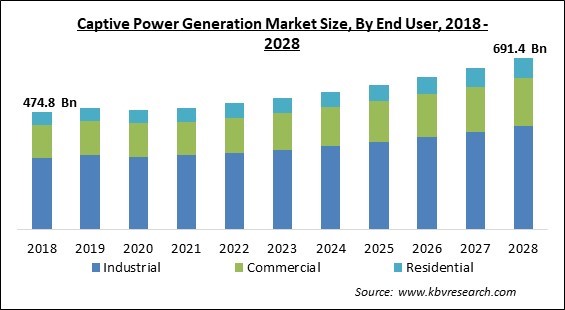 Energy-intensive sectors, such as steel mills, chemical plants, and other companies, where the quality and reliability of the power supply are essential, frequently use capacity power plants. By integrating solar power with an electrical generator, cogeneration unit, and battery system, solar PV innovation and investment can drastically lower costs and make it feasible for less energy-intensive businesses to economically pull back from the grid.

Any industry requires a continuous and reliable supply of power because it is one of the key inputs. The quality of the electricity, in terms of voltage, harmonics, and other technical factors, is significant for various businesses. Another crucial element for enterprises is a supply that is reliable, of high quality, and affordable. Sometimes the state utilities are unable to adequately meet these standards.

Many enterprises are now using renewable energy sources, including wind, solar, and biomass as captive sources. Although the effectiveness of such captive plants in energy-intensive processes may be challenged due to the erratic nature of the power supply, captive renewable energy can be advantageous for many less energy-intensive industries, such as the food, textile, and commercial office sectors.

Increasing Demand and Consumption of Electricity

One of the critical attributes of any country's economic prosperity is energy. Given that developing nations' energy requirements are always growing and require significant investments to be met, the energy industry assumes a crucial role in these countries. The human population is still growing. According to UN research, the population of the world, which was 7.8 billion in 2020, is expected to grow by 11 billion over 2050 to reach 9.6 billion by 2100. The energy needs of populations will increase as nations expand. The need for energy rises as affluence does. Products that require energy are more readily available as a result of technological advancements. Populations seek more consumer goods as more income is generated.

The Rapid Expansion of the Industrial Sector All Over the World

A captive power plant has significant operating and maintenance costs. Thermal facilities have intricate machinery and equipment that must be handled carefully by qualified staff. Machine problems occur frequently, and more maintenance is required. The ability of the facility to expand its capacity and resources is constrained by a lack of current equipment and qualified employees to handle maintenance and operations. Transporting raw materials and maintaining substantial storage facilities for coal and other fuels come at significant expense. Moreover, the captive power plant's total efficiency is regarded as low. Many thermal power facilities that use coal have outdated technology that cannot be upgraded. 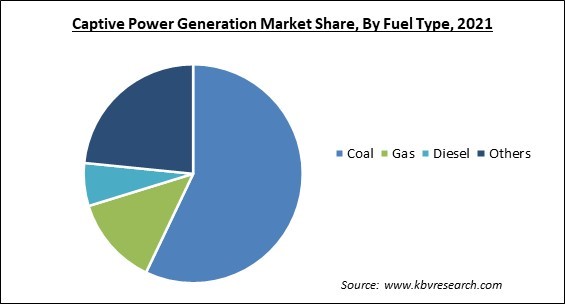 Based on End-User, the Captive Power Generation Market is categorized into Residential, Commercial, and Industrial. In 2021, the residential segment witnessed a substantial revenue share of the captive power generation market. The growth of the segment is increasing as a result of an increasing number of people migrating to urban areas. The increasing spread of urbanization is accelerating the demand for energy all over the world.

On the basis of Fuel Type, the Captive Power Generation Market is segregated into Diesel, Gas, Coal, and Others. In 2021, the coal segment witnessed the biggest revenue share of the captive power plant market. The growth of the segment is attributed to the increasing utilization of coal as a fuel. A substantial proportion of the electricity in the world is produced by coal. An example of a fossil fuel power station is one that burns coal. A pulverized coal-fired boiler burns coal after it has been pulverized.

Based on Technology, the Captive Power Generation Market is segmented into Heat Exchanger, Turbines, Gas Engines, Transformers, and Others. In 2021, the heat exchangers segment garnered a significant revenue share of the captive power generation market. The rapid rise in the growth of the segment is primarily owing to the extensive use of heat changers for a variety of purposes. Heat exchangers are used in power plants to extract heat from smoldering waste gases.

By Ownership, the Captive Power Generation Market is bifurcated into Single Ownership and Multiple Ownership. In 2021, the multiple segments procured the highest revenue share of the captive power market. If a captive power plant satisfies the requirements, such as the beneficiaries holding at least 26% of the equity and jointly consuming 51% of the electricity generated during the year, it can also serve many stakeholders through a group captive mechanism.

Region-wise, the Captive Power Generation Market is analyzed across North America, Europe, Asia-pacific, and LAMEA. In 2021, North America held the largest revenue share of the captive power generation market. the captive power market it the region is growing at a very rapid pace owing to the fact that North America is witnessing a significant presence of market players. Moreover, the market is the region is very competitive. In order to survive in the cutting-edge industry, these market players are rapidly working on development and introduction of several new solutions. This factor is boosting the growth of the regional captive power generation market.