The Global Capsule Endoscopy System Market size is expected to reach $1.4 billion by 2028, rising at a market growth of 12.1% CAGR during the forecast period.

Capsule endoscopy is a non-invasive procedure that permits a comprehensive examination of the gastrointestinal tract utilizing a video capsule, which is fitted with a camera, battery, transmitter, and light source. The images captured by video capsules in the stomach, esophagus, and small intestine are used to diagnose gastrointestinal illnesses.

In front of the capsule endoscope is a hemispherical acrylic optical dome. The gap between the dome and the internal camera is just right for viewing the digestive tract with the mounted camera. A single-focal lens with a narrow aperture is used in the lens. To illuminate the inside of the digestive tract, light-emitting diodes are used as light sources. Metal oxide silicon imagers function in low light using micropower and contain a large number of circuits packed into a compact chip.

Millions of individuals worldwide are affected by gastrointestinal (GI) diseases, which have a significant economic impact, including healthcare costs. Colorectal cancer, gastroesophageal reflux disease (GERD), functional constipation, and inflammatory bowel disease are all GI disorders. A video capsule containing a camera, battery, transmitter, and light source is used in capsule endoscopy, a non-invasive method that permits a comprehensive examination of the gastrointestinal tract using wireless and disposable equipment known as a video capsule. The images captured by video capsules in the esophagus, stomach, and small intestine are used to diagnose gastrointestinal illnesses. The capsule's integrated camera shoots two photographs every second, and the battery lasts for eight hours. 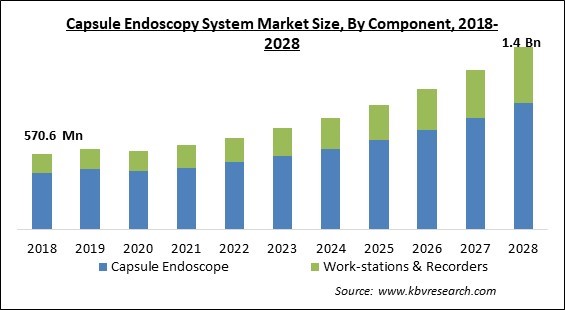 The COVID-19 pandemic had drastic consequences on people across the world. Apart from the people who directly died due to the virus, the consequent lockdowns issued by the governments had a negative impact on the physical and mental health of the people. Patients who were not suffering from life-threatening diseases preferred to stay at home than get treatment or surgeries done. Therefore, the COVID-19 pandemic has had a significant impact on the capsule endoscopy business. During the COVID-19 pandemic, a number of elective procedures was postponed, delayed, canceled, and reduced, which had a substantial influence on the market.

A Rise in the incidence of Gastrointestinal Diseases

Gastrointestinal disorders affect the entire GI tract, as well as digestive organs such as the liver, pancreas, and gallbladder. Millions of people throughout the world suffer from gastrointestinal ailments, which are one of the primary sources of morbidity and mortality. According to a report published by the International Foundation for Gastrointestinal Disorders in 2019, GERD affects over one-third of the world's population, resulting in bleeding problems, which drives the market pf capsule endoscopy. The incidence of primary biliary cholangitis (PBC) ranges from 0.33 to 5.8 occurrences per 100,000 persons. The attention of governments has been drawn to a dramatic increase in fatality rates from these diseases.

Capsule endoscopy is a safe way to diagnose bleeding and other GI issues that aren't detected by conventional methods. However, there is still a small probability that the capsule will get "stuck" in the digestive tract (such as in an intestinal pocket caused by diverticular disease). There's also a chance of bleeding if the capsule passes via a constricted tube (stricture) with inflammation or tissue injury. While intestinal obstruction is uncommon with capsule endoscopy, if necessary, an emollient purgative such as polypropylene glycol may be administered to help the capsule move. Double-balloon enteroscopy (in which two balloons alternately inflate and deflate) is a less common treatment that can gently urge the capsule through the obstruction site. 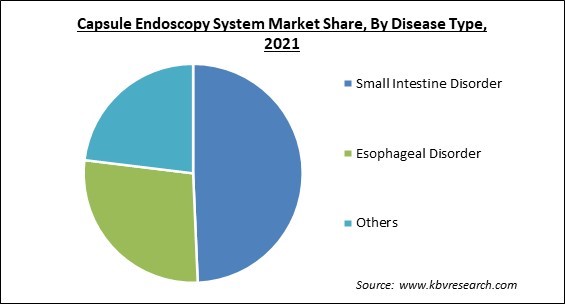 Based on Component, the market is segmented into Capsule Endoscope and Work-stations & Recorders. The work-stations and recorders segment procured a substantial revenue share in the capsule endoscopy system market in 2021. A capsule endoscopy system consists of a workstation, data recorder, sensor, and software that work along with wireless capsules. The data recorder is a device that is worn around the patient's waist and transmits the data acquired by the video capsule through sensors. The location and movement of the capsule inside the stomach can also be tracked using data recorders. Thus, a recorder is an essential part of making the procedure feasible. Hence, as the demand for capsule endoscopy grows, the demand for recorders is likely to follow.

Based on Regions, the market is segmented into North America, Europe, Asia Pacific, and Latin America, Middle East & Africa. North America acquired the largest revenue share in the capsule endoscopy system market in 2021. The need for minimally invasive screening treatments is increasing in North America, as is the demand for technologically advanced products and systems, as well as improvements in healthcare infrastructure. Moreover, increased awareness about the early detection of diseases such as gastrointestinal disorders, cancer, and other chronic ailments is driving the growth of the capsule endoscopy system market in the region.

The capsule endoscopy system market size is projected to reach USD 1.4 billion by 2028.

Increase in gastrointestinal cancer cases are driving the market in coming years, however, marginal risks involved in capsule endoscopy growth of the market.

The Capsule Endoscope segment acquired largest market share in the Global Capsule Endoscopy System Market by Component in 2021, thereby, achieving a market value of $956 million by 2028.

The North America is the fastest growing region in the Global Capsule Endoscopy System Market by Region in 2021.