Why is a Network Security Firewall Important for Your Enterprise? 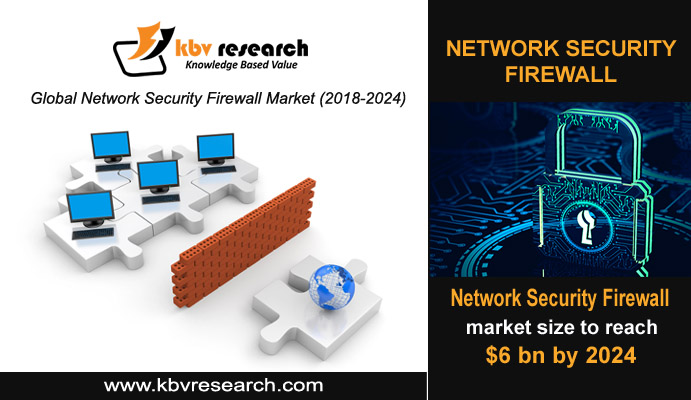 A Network Security Firewall acts as a barrier to keep destructive forces away from computers on a network behind the firewall. A network firewall is similar to a physical firewall which prevents a fire from spreading from one area to the other. Firewalls protect against several security threats like denial of service attacks, unauthorized remote logins, and viruses and worms which are spread over a network.

WHAT DO WE UNDERSTAND BY NETWORK SECURITY FIREWALL?

Firewalls are network security systems that monitor and control network traffic based on predetermined security rules. A firewall creates a barrier between trusted internal networks and untrusted external networks like the Internet. Firewalls are categorized as either network firewalls or host-based firewalls. A network firewall filters traffic between multiple networks and runs on network hardware. Host-based firewalls can be run on host computers and they control a network’s traffic in and out of those machines.
Network security firewall is a security system created for preventing unauthorized access to private information on a network. Firewall can be utilized as software or hardware and can separate a specific network and its data from an outside network to maintain the privacy of a specific network’s data. There are several advantages that are associated with the utilization of a firewall in a network, especially the easy installation and the high speed. Employing a firewall for a network is relatively inexpensive than to secure each computer individually.

THE DIFFERENT TYPES OF FIREWALL ARCHITECTURES:

As another simplistic firewall type that is meant to quickly and easily approve or deny traffic without consuming significant computing resources, circuit-level gateways work by verifying the transmission control protocol (TCP) handshake. This TCP handshake check is designed to make sure that the session the packet is from is legitimate. Along with being extremely resource-efficient, these firewalls do not check the packet on their own. Thus, if a packet holds malware, but had the right TCP handshake, it would pass right through. This is why circuit-level gateways might not be enough to protect your business by themselves.

The recently-released firewall products are being advertised as “next-generation” architectures. Nevertheless, there is not as much consensus on what makes a firewall truly next generation. The common features of next-generation firewall architectures involve deep-packet inspection (checking the actual contents of the data packet), TCP handshake checks, and surface-level packet inspection. Next-generation firewalls may include other technologies as well, such as intrusion prevention systems (IPSs) that work to automatically stop attacks against your network. The issue is that there is no one definition of a next-generation firewall, so it’s important to verify what specific capabilities such firewalls have before investing in one.

Being the most basic and oldest type of firewall architecture, packet-filtering firewalls create a checkpoint at a switch or traffic router. Firewalls perform a simple check of the data packets coming through the router—inspecting information like the destination and origination IP address, port number, packet type, and other surface-level information without having to open the packet to inspect its contents. If the information packet fails to pass the inspection, it is dropped. These firewalls aren’t very resource-intensive, which is a good thing about them. This means they don’t have a major impact on system performance and are simple.

WHY DOES A FIREWALL MATTER?

As cybercrime is expanding and threatening businesses across the globe, it is apparent that your organization needs firewall security. Without you realizing, your organization might already be having a firewall management program set up. Initially, the term firewall referred to a wall (literally), which was design to put a halt to the spread of a fire. In computing firewall protection, firewalls can be understood as a network device which can block certain kinds of network traffic. This can form a wall between a trusted and an untrusted network. It is similar to physical firewalls, the only difference being, preventing the spread of computer attacks.

The network security firewall market is mounting at a rapid pace due to a wide range of factors. Factors promoting the adoption of this industry are growing demand for privacy and network security across the globe. Being the first line of defense and protector against lethal attacks and traffic that passes in and out of a network, firewalls are vital components that help in securing private systems of home systems, organizations, etc.
Network security firewalls have significantly enhanced their ability to integrate threat intelligence and defense to protect against various threats like control and command servers, advanced persistent threats (APTs), botnets, and zero-day threats. Firewalls will persist to develop, and it’s evident that their range of capabilities and functionalities will expand as well. Firewalls have been around for three decades, but they’ve evolved drastically to include features that used to be sold as separate appliances and to pull in externally gathered data to make smarter decisions about which network traffic to allow and which traffic to block. Owing to the emerging trends, the Global Network Security Firewall Market is being estimated to emerge as a market growth of 12.3% over the forecast period.