The Global Blockchain Messaging Apps Market size is expected to reach $215.7 million by 2028, rising at a market growth of 42.8% CAGR during the forecast period.

A messaging system that leverages blockchain technology to send and send messages is known as a blockchain-based messaging system. Blockchain is a distributed database that enables transactions that are safe, open, and unchangeable. As a result, it provides the perfect messaging system platform since it can offer a great degree of confidentiality and anonymity. 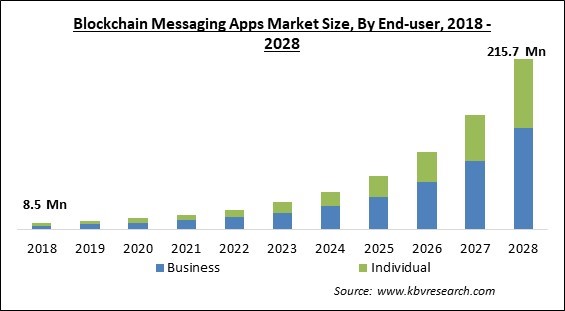 Data security is one of the key advantages of adopting a blockchain-based messaging system. Messages are far less prone to breaches and hackers when they are kept on a decentralized network. It is considerably more difficult for unauthorized persons to view the messages since each one is encrypted and accessible only with the right key.

More than 42 million individuals have been impacted by the COVID-19 pandemic, which has significantly disrupted the worldwide environment. Transmission must be kept to a minimum as the sole defense. Digital contact tracing is a useful method that may be used for this goal since it does away with the need for manual contact tracing and can assist in identifying and isolating afflicted individuals. Due to the strict lockdown laws that caused people to spend more time online networking, the COVID-19 pandemic had a beneficial effect on the market. During the projected period, the market expansion is anticipated to be boosted by the spike in collaborations and the introduction of decentralized social networking platforms based on blockchain technology.

Some of the most widely used centralized communication tools on the market are messenger apps such as WhatsApp and Facebook Messenger. There are several centralized messengers, and they are all organized similarly. These messengers are owned by private firms, who also have complete operational control over the applications. The businesses are in charge of handling user communications and data storage. While some centralized messengers assert that they don't keep messages on file, others make it quite plain that they do.

The benefit of such applications' decentralized nature

Modern messaging applications are centralized, which opens up a wide range of possible technological problems. Data demonstrates that network issues and frequent breakdowns are commonplace in applications such as WhatsApp and Facebook Messenger. The enormous, centralized operating system is the primary cause of catastrophic accidents. It's challenging to maintain the seamless operation of a centralized system with hundreds of millions of users. For instance, a modest app update often throws a centralized messaging system into disarray. Because a centralized data processing system manages the update procedure, the whole network must concurrently update its mechanism.

Blockchain messengers still have a fair amount of unavoidable problems, despite the fact that they have the potential to reduce many of the privacy concerns faced by their centralized counterparts. Although a decentralized messenger might perhaps protect peoples' privacy, blockchain technology itself could prevent widespread use. The risk of data breaches is perhaps the largest disadvantage of employing a blockchain-based messaging system. The fact that communications are kept on a decentralized network makes it difficult to identify the source of a leak or breach.

Based on end-user, the blockchain messaging apps market is segmented into individual and business. In 2021, the business sector showcased the major revenue share in the market. The advantages of blockchain messaging applications, such as their usability and decentralized communication, which enable high-privacy corporate communication, are credited with the segment's rise. 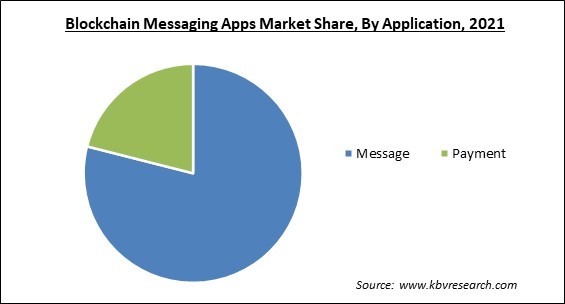 Based on application, the blockchain messaging app market is divided into message and payment. The payment segment accounted for the significant revenue share in the market. During the projected period, the segment's growth is predicted to be driven by the rising global popularity of cryptocurrencies. Users feel confident using these apps for payments and storing sensitive data on them since they are thought to be more secure than centralized applications.

Based on the operating system, the blockchain messaging apps market into categories for iOS, Android, and other operating systems. In 2021, the android segment led the market with the highest revenue share. The dominance of Android as the most popular mobile operating system globally is credited with the segment's expansion.

Based on region, the blockchain messaging apps market is categorized into North America, Europe, Asia Pacific, and LAMEA. In 2021, North America led the market and generated highest revenue share. Major market companies' presence is credited with the region's development. Additionally, the legalization of cryptocurrencies and the widespread use of blockchain technology in the area augur well for the expansion of the sector. During the projected period, the market is anticipated to increase regionally as a result of the market participants' rising introduction of applications and collaborations with tech firms.

The global Blockchain Messaging Apps Market size is expected to reach $215.7 million by 2028.

Centralized messaging applications lack user privacy features are driving the market in coming years, however, Decentralized nature leads to complexity restraints the growth of the market.

The Message market is leading the segment in the Global Blockchain Messaging Apps Market by Application in 2021; thereby, achieving a market value of $161.1 million by 2028.

The North America market dominated the Global Blockchain Messaging Apps Market by Region in 2021; thereby, achieving a market value of $74.7 million by 2028.