The Global Blasting Automation Services Market size is expected to reach $823.4 Million by 2026, rising at a market growth of 14% CAGR during the forecast period. Blasting automation is a technique that makes sure higher precision in blasting operations which is conducted at the crust in the lower depths, long-hole boring, and safer mining of metalliferous ores.

Automation allows us to improve the productiveness, consistency, and fine blasting operation, all while minimizing the cost. Using advanced technology in order to automate boring and blasting operations let mine owners to increase productivity and allowed the resources for challenging and crucial duties. Technology-backed blasting and drilling operations decreases the time that is spent by miners during manual processes and increases safety at mines. Blasting automation solutions basically detect the slope angle, the number of explosives that are required for optimal results, also the density of rocks while ensuring higher safety and precision.

The usage of advanced technology in order to automate blasting and drilling operations permits mine owners to increase productivity and as well as free the resources for work-critical tasks. The unbaiting requirement for natural resources is stimulating miners to perform mining operations especially in challenging geographies, which is consequently resulting in higher in-ground stress. This has prompted the necessity to deploy more accurate and technology-backed blasting and drilling operations in order to lessen the time spent by miners during the manual processes and enhance safety at mines.

Numerous rules and regulations are being drafted to improve the safety of mine workers and check the environmental damages occurring due to mining activities. For example, the U.S. Surface Mining Control and Reclamation Act (SMCRA) aims to lessen the injury and damage to property and people, boosts the deployment of more innovative blasting methods. Likewise, Ghana’s Minerals and Mining (Explosives) Regulations regulate the conveyance, possession, use, and storage of explosives for mining, quarrying, and civil works. Parallel regulations have been applied in numerous countries, including Australia, Canada, India, and the U.S. In these countries mining significantly contributes to the overall national GDP. These guidelines boost the adoption of 3-D laser profiling, advanced hole deviation tools, and explosives-delivery system.

Based on Application, the market is segmented into Metal Mining, Non-Metal Mining and Others. The metal mining segment is anticipated to arise as one of the fastest-growing segments in the forecast period due to the increasing need for more effective blasting and drilling systems for deeper mines and the sustained adoption of similar hole mining. Integrating the 5G appropriation framework in mining activities will supposedly make more industry development openings. 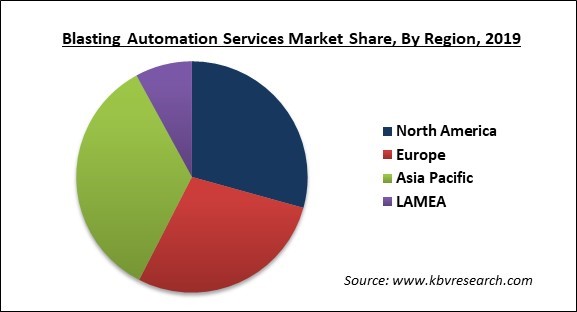 Based on Regions, the market is segmented into North America, Europe, Asia Pacific, and Latin America, Middle East & Africa. The market of Asia is anticipated to show the highest CAGR over the foreseeable period as plenty of coal, gold, and metal mines in India, China, and Australia will open opportunities for setting out an efficient and profitable mining solution. This is accredited to the presence of mines in countries like Australia, China, and India. There are numerous coals, copper, and gold mines in Australia and China in particular.

The blasting automation services market size is projected to reach USD 823.4 million by 2026.

There are several reason that cause high demand of this market one of them is the increasing proliferation of AI & ML in the mining sector.

The non-metal mining segment has a significant revenue share in the year 2019, due to the increasing demand for minerals like talc, gypsum, pumice, barite, and gemstones, among others.