The Global Bioabsorbable Stents Market size is expected to reach $429.2 Million by 2027, rising at a market growth of 6.9% CAGR during the forecast period. A stent is considered as a device that is implanted into the internal duct of the body with an aim to enlarge blood vessels and prevent blockage in the vessels. Some other names of bioabsorbable stents are naturally-dissolving stents and bioresorbable stents. These stents are developed from materials that get easily absorbed in the body and play an essential role in enlarging the vessels or internal duct for clearing the blockage that occurred because of the deposition of plague.

The global bioabsorbable stents market would showcase bright prospects due to the increment in geriatric population, increasing prevalence of cardiovascular disease, spur in percutaneous coronary intervention (PCI) procedure, and increasing adaptation of bioabsorbable stent by patients as well as physicians. Moreover, some of the catalysts for the growth of the market include constant development in the technology of stents, a massive hike in the demand for minimally invasive procedures, and a surge in the initiatives taken by the government for the development & production of bioabsorbable stents would boost the growth of the market. 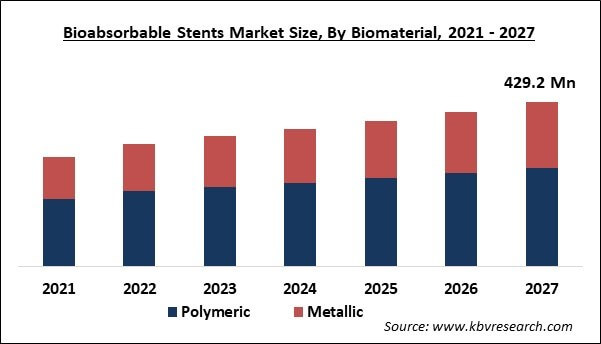 As per the Harvard Health School, approximately 2 million individuals require coronary artery stents each year. The present COVID-19 crisis has affected the coronary stents market in various ways. The business complications emerging from the present pandemic have developed confusion regarding the production of medical devices. The solution to several uncertainties observed by bioabsorbable stents manufacturers, surgical centers, hospitals, and companies operating in the supply chain of these medical devices would have to bear the stringent governmental regulations in order to continue their manufacturing processes.

The massive disturbance in the bioabsorbable stents market because of the COVID-19 pandemic in various countries is evident with the lack of availability of these devices in the market. Procurement and supply of the raw materials, like platinum and cobalt, needed to manufacture stents have been severely affected due to the low number of freights working between various continents. Various medical device manufacturing companies have their headquarters and manufacturing plants in various countries, which may result in the gap between demand and supply chain. These aspects show that the demand for bioabsorbable stents has taken a beating due to the global pandemic of the coronavirus.

Based on Biomaterial, the market is segmented into Polymeric and Metallic. The metallic stents segment would exhibit a major growth rate during the forecast years. Factors like metallic stents are considered an alternative solution utilized for the percutaneous nephrostomy procedure are responsible for this growth.

Based on Application, the market is segmented into Coronary Artery Disease and Peripheral Artery Disease. Based on the application, the coronary artery disease segment would showcase the highest growth rate in 2020, and would dominate the global market during the forecast period. This is due to the increasing geriatric population, surge in occurrence of diabetes, and unwillingness to do some proper physical exercise. 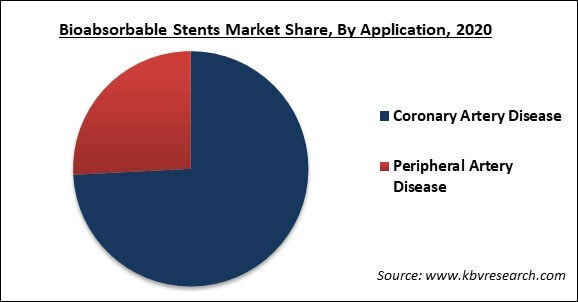 Based on End User, the market is segmented into Hospital and Cardiac Center. Based on the end-user, the hospital segment was the fastest growing segment in 2020 and would lead the global market during the forecast period. This is attributed to the surge in cardiac diseases and the accessibility of various alternatives for treatment procedures around the world. Though, the cardiac centers segment would showcase a major growth rate during the forecast period. This is due to the growing rate of coronary artery disease, reduction in the cost of post-operative cardiac care, and surge in the life expectancy of the patient having the cardiac disease.

Based on Regions, the market is segmented into North America, Europe, Asia Pacific, and Latin America, Middle East & Africa. Asia-Pacific would showcase the maximum growth rate during the forecast period. This is credited to a surge in the occurrence of coronary artery disease, a surge in awareness about the bioabsorbable stents, increasing demand for minimally invasive surgery, and an increment in the adoption of a hectic and inactive lifestyle.

The global bioabsorbable stents market size is expected to reach $429.2 million by 2027.

Rising cases of PAD and CAD diseases across the world are driving the market in coming years, however, the low adoption rate of stents have limited the growth of the market.

On the basis of biomaterial, the polymeric stents segment acquired the largest revenue share of the global bioabsorbable stents market in 2020 and would exhibit a similar trend even throughout the forecast period.

North America emerged as the leading region of the global bioabsorbable stents market and would showcase a similar trend even during the forecast period.