The Global Baggage Handling System Market size is expected to reach $10.9 billion by 2026, rising at a market growth of 7.9% CAGR during the forecast period. The Baggage Handling Systems are the conveyor system which transports the passenger baggage from the departure area to the cargo area and then to the arrival location. It comprises of various components that intended to keep an eye on bag weights and bag display for item count, security, and fix a distinctive barcode on the luggage.

The baggage handling system uses different techniques like Barcode System and Radio Frequency Identification (RFID) to deliver the handling process. It broadly finds its application at the railway station, airports, and others. There are many factors that drive the baggage handling market such as increasing air passenger volume, rising focus on enhancing operational efficiency at airports, and important developments in intermodal transport.

Expected growth in air travel, technological advancements, and modernization of airports drive the growth of the baggage handling system market. Although, high consequences of system failure and increased upfront and maintenance cost of the baggage handling system (BHS) restricted the growth of the market. In the coming years, the introduction of robotization at airports will provide many opportunities for the companies operating in this market. 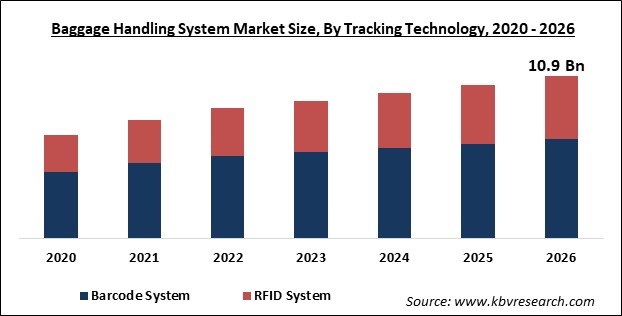 Based on Tracking Technology, the market is segmented into Barcode System and RFID System. The RFID technology category is estimated to observe the highest growth due to the cost-effectiveness and reliability of the technology in enhancing the baggage handling process. RFID helps in reducing the mishandling of baggage by 20%, which further enhances the passenger experience. It serves as an easy way to attain the baggage mishandling track records to make it compliant with the IATA resolution 753.

Based on Type, the market is segmented into Conveyor and Destination Coded Vehicle (DCV). The category of conveyor is predicted to lead the baggage handling conveyor system market, by type. Airports with little traveller traffic utilize conveyors as the main transportation medium for baggage. A few class B and Class C airports utilize the conveyor type baggage handling system.

By Mode of Transport

Based on Mode of Transport, the market is segmented into Airport, Railway and Marine. Airports category will continue its dominance in the baggage handling market for at least 20-30 years. With the hostile incentives and mandates from the government, China and India have emerged as the leading operators in the airport industry. Airports baggage handling systems play a crucial role in the global economy as it helps in attracting more suppliers and manufacturers for business investments.

Based on Regions, the market is segmented into North America, Europe, Asia Pacific, and Latin America, Middle East & Africa. The Asia Pacific is estimated to be the largest market shareholder in the market. Some factors like upcoming airport projects, the economy of countries, growing air passenger volume, the scope for multimodal transport, the presence of the cruise industry will boost the demand for baggage handling systems. Moreover, increasing government investments in railway, marine, and airport projects, government regulations and consumer acceptance will also contribute to the growth of the baggage handling system marketing in the mentioned region.

The major strategies followed by the market participants are Partnerships. Based on the Analysis presented in the Cardinal matrix; Siemens AG is the major forerunner in the Baggage Handling System Market. Companies such as BEUMER Group GmbH & Co. KG, Daifuku Co., Limited, Smiths Group PLC, and Toyota Industries Corporation are some of the key innovators in the market.

By Mode of Transport

The baggage handling system market size is projected to reach USD 10.9 billion by 2026.

The major factors that are anticipated to drive the baggage handling system industry include swift increase in passengers travelling through airways.

The Barcode technology is estimated to observe the highest market share due to its usage by the major airline companies around the world.

The North America is estimated to record a strong growth rate due to the various airport development plans around the U.S. and Canada. Many government authorities have taken initiatives to invest in luggage handler equipment as North America topped the world in baggage mishandling cases.