The Global Automation in Combined Heat and Power Market size is expected to reach $20.1 billion by 2028, rising at a market growth of 7.2% CAGR during the forecast period.

Automation in combined heat and power systems benefits industries in several ways, including district heating network optimization, steam network optimization, and safety system optimization. Additionally, it is utilized to boost plant productivity and requires less labor than the conventional one. Power plants can estimate flue gas emissions due to automation, which also helps them react pro-actively and quickly to possible issues.

The emphasis on industrial automation and resource efficiency, as well as the use of cutting-edge technologies like IoT and AI in industrial settings, are predicted to be the main drivers of growth in the market for combined heat and power automation. Additionally, the concept of connected enterprises is emerging, which accelerates market growth overall.

Production efficiency, actual costs, lifetime costs, emissions, and all of their interdependencies can be measured, calculated, estimated, and monitored due to automation. It helps the factory control and optimizes its processes appropriately. The owners and builders of brand-new, sizable combined heat and power (CHP) power plants are fully aware of the advantages of automation. However, in smaller units, not all users are currently aware of the major advantages that modern automation offers over a more straightforward PLC system, both in terms of benefits and cost.

The COVID-19 disease pandemic has had a significant impact on production and industrial operations, which has also hindered market growth for automation in combined heat and power generation. The COVID-19 pandemic has also affected the electronics industry since production facilities have slowed down, which has increased demand for electronics and semiconductor products in these sectors. Its main effects include a substantial manufacturing disruption throughout Europe and a halt in Chinese part shipments, which limit the market opportunity for automation in combined heat and power systems.

The distribution of power production is increasing

Combined heat and power can benefit from automation

One more advantage of automation is that it enables quick responses when they are most needed. Software for automating business processes can parse incoming data from emails, web forms, social networks, system data, etc. After then, it can notify of events like complaints or service interruptions. Incoming message replies can also be handled via automation. As a result, when something goes wrong, resolutions happen more quickly. The advantages of automation are all excellent on their own.

The large initial capital expense needed for installation is one of the greatest disadvantages of establishing a CHP plant. CHP facilities need additional equipment such as heat exchangers, boilers, absorption chillers, and other equipment in addition to the power generation equipment like prime mover, generator systems, and others. A key barrier to the growth of the CHP business is the cost of a typical CHP plant, which can be about 240% higher than the cost of a power production plant with equivalent capacity and prime mover. The great efficiency of the CHP requires routine maintenance of every component, which drives up overall maintenance expenses and hampers the growth of the automation in combined heat and power market.

Based on the Component, the Automation in Combined Heat and Power Market is divided into Sensors, Controllers, Switches & Relays, Drives, and Others. The sensors segment witnessed a significant revenue share in automation in the combined heat and power market in 2021. This is frequently referred to as a "dump radiator," and it is typically managed by a valve coupled to a temperature sensor on the CHP package's return water input. The valve opens if the water temperature rises beyond a certain threshold, allowing water to flow into the dump radiators and then back into the return piping system. 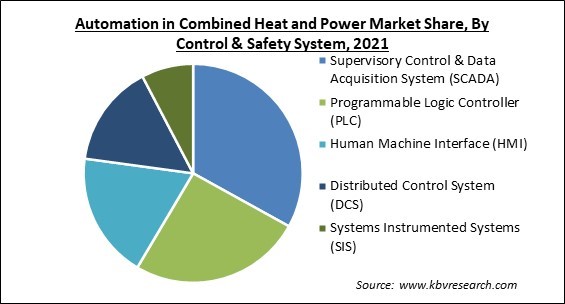 On the basis of Control and Safety System, the Automation in Combined Heat and Power Market is segmented into Distributed Control System (DCS), Supervisory control & data acquisition system (SCADA), Systems instrumented systems (SIS), Programmable Logic Controller (PLC), and Human machine interface (HMI). The Supervisory control & data acquisition system (SCADA) segment procured the largest revenue share in the automation in the combined heat and power market in 2021. It is because it manages the operator interfaces that allow monitoring and the issuance of process directives, such as changing the controller set point. The SCADA concept was created to be a common method of remote access to various local control modules from various manufacturers while providing access through standard automation protocols.

Region-wise, the Automation in Combined Heat and Power Market is analyzed across North America, Europe, Asia Pacific, and LAMEA. The Asia Pacific region garnered a promising revenue share in the automation in the combined heat and power market in 2021. It is because of technology advancements, ongoing power generation projects, and infrastructure upgrades. China and India are driving the growth in power output and consumption in the area, which is the world's largest user of energy. Asia Pacific offers enormous potential for combined heat and power, largely because of China's rapid economic development and the switch from coal-based to gas-fired power generation. 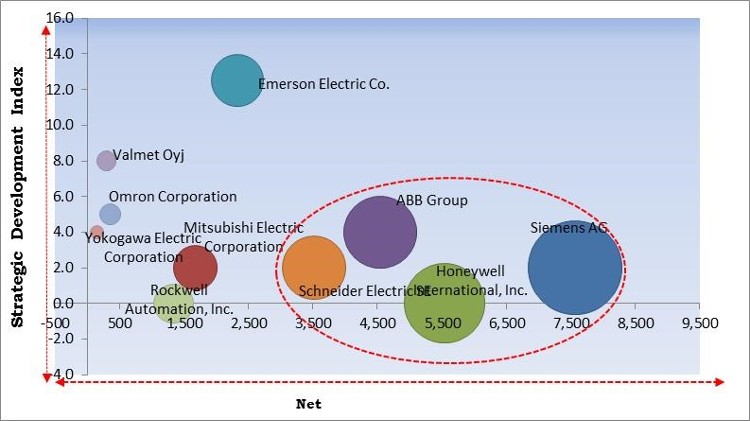 The major strategies followed by the market participants are Partnership. Based on the Analysis presented in the Cardinal matrix; Siemens AG, Honeywell International, Inc. and ABB Group are the forerunners in the Automation in Combined Heat and Power. Companies such as Schneider Electric SE, Emerson Electric Co. and Mitsubishi Electric Corporation are some of the key innovators in Automation in Combined Heat and Power.

Strategies deployed in Automation in Combined Heat and Power Market