The Global Apheresis Market size is expected to reach $4 billion by 2028, rising at a market growth of 8.1% CAGR during the forecast period.

Apheresis is the removal of blood from a donor's body, the expulsion of one or more blood products such as platelets, white blood cells, or plasma, and the fluid replacement of the surviving blood back into the donor during or after the procedure. In apheresis, whole blood from a patient or donor's body is converted within an instrument that functions essentially as a centrifuge, separating the components of whole blood. The solid residues are then re-transfused into the donor after one of the divided portions is removed. 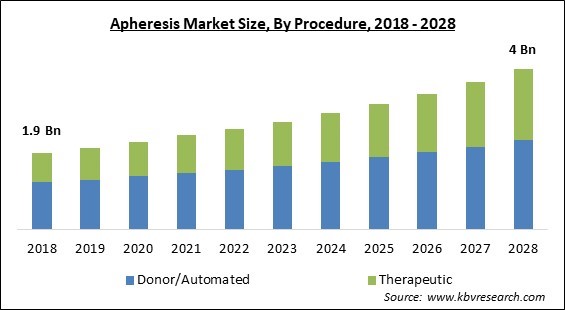 Red blood cells, white blood cells, platelets, and plasma are the four components of human blood. To cure a disease, one of those elements may need to be removed or supplanted using a procedure known as apheresis. Apheresis makes use of a centrifuge to separate blood into its constituents based on density.

The increased use of plasma donation in the treatment of burn sufferers, trauma patients, and patients dealing with severe disorders or major injuries contributes to the market's growth. Furthermore, patients admitted due to COVID-19 receive plasma treatment therapy (convalescent plasma). On the other hand, progressions in the healthcare sector, emerging markets are expected to provide significant lucrative apheresis potential market for key players.

Due to the COVID-19, blood clotting variables including platelet count, D-dimmer, fibrinogen, prothrombin time (PT), and activated partial thromboplastin time (aPTT) were discovered as complications in patients who were severely infected, resulting in an extensive use of plasma therapy treatment. The US FDA has approved emergency use authorization (EUA) of convalescent plasma (CCP) therapy in hospitalized patients with COVID-19 in August 2020. Terumo BCT Inc. Terumo BCT's Spectra Optia Apheresis System, in combination with Marker Therapeutics' D2000 Adsorption Cartridge, got FDA approval in April 2020 for the Emergency Use Authorization (EUA) to treat persons aged 18 years or older with confirmed COVID-19 disease.

When a person has a regular routine, they do not want to change it because it is most advantageous for them. In reality, apheresis donations may be more important at times when specific component needs are greater. Contrary to popular belief, double red cell campaign contributions can be more useful in some cases. Depending on the program, there are prerequisites for this type of donation, in which male and female donors must fulfill more specific physical standards to donate. Although this type of donation can take up to a half-hour longer, it has the advantage of being the most commonly used part of the blood. The use of red blood cells during surgery and trauma is widespread.

With the pandemic wreaking havoc around the world, the health-care industry has seized the opportunity to innovate and improve technologically. Investors' desire to invest in the healthcare industry. In the midst of a pandemic, counseling, telehealth, monitoring patients, and even digital medical insurance have become increasingly popular. Companies that previously placed a premium policy on employees' health during new employee onboarding are now recognizing the value of having a healthy workforce. When it comes to telemedicine, there are numerous benefits. RFID solutions, pulse, and ECG are just a few examples of devices that can monitor a patient's vital signs in real-time. 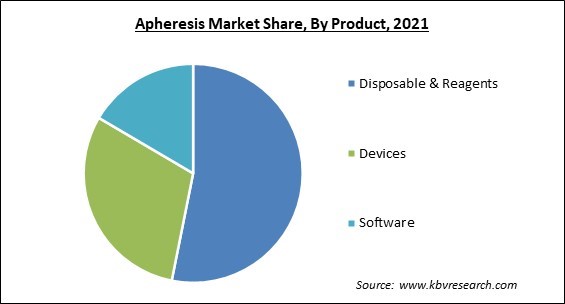 As the person sits in a comfortable seat, the procedure usually takes about two to four hours, depending on how ill a patient is and what needs to be collected. Although apheresis is usually painless, some adverse effects may occur, including a dip in blood pressure, lightheadedness, perspiration, or soreness in the arm where the needle is inserted. Since apheresis takes longer than conventional blood donation and uses needles in both arms instead of just one, there's a higher likelihood of such side effects. There is a minor risk of allergic reaction or fever if a patient receives donor elements such as red blood cells as part of their treatment, but patients are continuously watched and any adverse reactions are swiftly identified and managed.

Based on Procedure, the market is segmented into Donor/Automated and Therapeutic. The donor/automated segment garnered the largest revenue share in the apheresis market 2021. It is due to an increase in apheresis platelet and apheresis plasma charitable contributions has contributed to market growth. The donor's blood is extracted, and the cell separator collects Platelets, Plasma, and/or Red Cells. The residual components, as well as saline fluid, are transferred to the donor. Each operation takes between one and two hours to complete.

Based on Product, the market is segmented into Disposable & Reagents, Devices, and Software. The device segment witnessed a significant revenue share in the apheresis market 2021. It is due to the devices use in-line automated technology to separate whole blood into component fractions, with the desired fraction removed and the remaining components returned. In TPE, this separation can be accomplished through centrifugation or outer layer filtration using either constant or unreliable flow.

Based on Method, the market is segmented into Centrifugation, Membrane Separation, and Selective Adsorption. The centrifugation segment procured the largest revenue share in the apheresis market 2021. Due to the common use of centrifugation to obtain blood components, such as packed red blood cells (PRBCs) and fresh frozen plasma (FFP), in one heavy spin. The blood component divider draws whole blood from a patient and separates it into its constituent elements using centrifugal force as its operating principle.

Based on End User, the market is segmented into Blood Centers, Hospitals, and Others. The hospital segment witnessed a significant revenue share in the apheresis market 2021. Due the various advance facilities and professional working in the hospital propels the segment. When apheresis is performed on a patient, one of the separated components is removed when it is impacted by the disease, and the remaining variables are then re-transfused to the patient. Apheresis is used for a variety of hematological, neurologic, and transplant-related reasons.

Based on Component, the market is segmented into Plasma (Plasmapheresis), Platelets (Plateletpheresis), Leukocytes (Leukapheresis or leukopheresis), Lymphocytes (Lymphopheresis or lymphapheresis), and RBC's (Erythropheresis). The Plasma (Plasmapheresis) segment garnered the largest revenue share in the Apheresis market 2021. Plasmapheresis also known as plasma exchange, is a medical procedure in which whole blood is separated into cell components and plasma using a device. The plasma is discarded and supplanted with a colloid fluid, which is then combined with the cell functions and returned to the patient. Typically, the colloid fluid is a mixture of human serum albumin and/or fresh and frozen plasma.

Based on Regions, the market is segmented into North America, Europe, Asia Pacific, and Latin America, Middle East & Africa. The North America region procured the largest revenue share in the apheresis market in 2021. Due to the early adoption of novel apheresis systems and the rise in the predominance of blood-related disorders in this region. This region's large share can be attributed to improved access to advanced blood collection innovations, the existence of developed healthcare architecture, and the strong influence of foremost apheresis firms in the country.

The major strategies followed by the market participants are Acquisitions. Based on the Analysis presented in the Cardinal matrix; Fresenius SE & Co. KGaA are the forerunners in the Apheresis Market. Companies such as Charles River Laboratories International, Inc., Terumo Corporation and Asahi Kasei Medical Co., Ltd are some of the key innovators in the Market.