The Global Algae Protein Market size is expected to reach $4.4 billion by 2028, rising at a market growth of 8.1% CAGR during the forecast period.

Algae are considered an alternate and sustainable source of protein due to their high protein content. With millions of species available, businesses are beginning to employ algae as a source of protein for both people and animals. Green and blue-green algae contain between 40 and 60 percent protein and provide excellent amino acid purity and nutritional advantages. 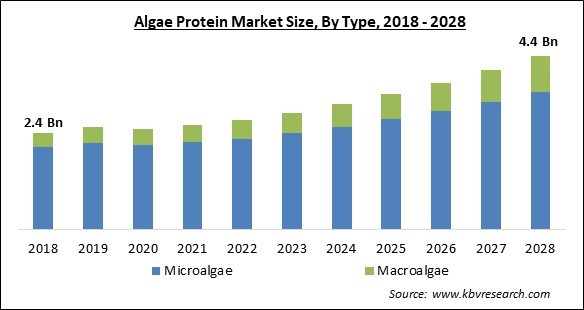 As algae are easy to grow and manage, it is now being studied as a possible source of protein by several firms. After extraction, these sources of high-protein algae can be utilized for several purposes. One of the benefits of this kind of protein is that it does not require land for production and can be cultivated in quality-controlled aquatic habitats, such as ponds.

Compared to traditional sources of animal proteins that largely contribute to climate change, it is a sustainable protein source. Diverse acidic, alkaline, and aqueous procedures are used to extract the seaweed and microalgae proteins from the algae. Multiple rounds of centrifugation are then followed by additional rounds of filtration process or precipitation to achieve the algal protein content.

While this is the standard way of manufacture, various techniques, such as ultrasonic extraction, electromagnetic current, and microwave-assisted withdrawal, have been evaluated. The proteins from algae can then be utilized for human and animal nutrition, in addition to aquaculture.

Reduced agricultural productivity, which disrupts the raw material supply, labor shortages in industrial facilities, and distribution system disruptions have affected supply chains. Due to the global lockdown, several commercial algae production and processing facilities were stopped or operating at a reduced capacity, which drastically affected global production. Nonetheless, some study indicates that algae-derived nutraceuticals may serve as immune boosters against COVID-19 and other viral diseases. Consequently, the increasing popularity of algae nutraceuticals, particularly spirulina-based products, has raised consumer demand, which would contributed to the industry's growth throughout the pandemic.

Awareness Of The Health Advantages Of Omega-3 Among Consumers

According to the Global Organization for EPA and DHA (GOED), omega-3 is the most studied nutrition in the world, with over 8,000 clinical trials done in the last decade. On the market, omega – 3 is best recognized as a product derived from algae. The expansion of the algae products market has been propelled by the global increase in healthcare expenditures, as well as the rising prevalence and consumer awareness of omega-3 for preventative healthcare.

Demand Expansion In The Pharmaceutical Sector

The high quantities of cell wall anionic polysaccharides can bind to proteins and form a viscous media, so compounding the difficulties of protein extraction is one of the most significant obstacles associated with protein extraction from algae. It has been proposed that the morphology of various seaweed species is a significant role in determining protein output, with more robust thallus forms requiring more processing. Several brown algae species were observed to have lower in vitro digestibility (51.8%–57.1%) compared to red algae P. palmata and P. tenera, which was attributed to higher quantities of dietary fiber.

Based on the Type, the Algae Protein Market is segmented into Microalgae and Macroalgae. The microalgae segment acquired the highest revenue share in the algae protein market in 2021. It is because Astaxanthin, Vitamins A, C, E, H, B1, B2, B6, and B12, polysaccharides, polyunsaturated fatty acids, and carotene are abundant in microalgae. Seaweed, also known as macroalgae, is a significant source of critical nutrients and new bioactive compounds. Red and brown seaweeds are rich in vital fatty acids and a range of elements, including vitamins, proteins, and minerals. 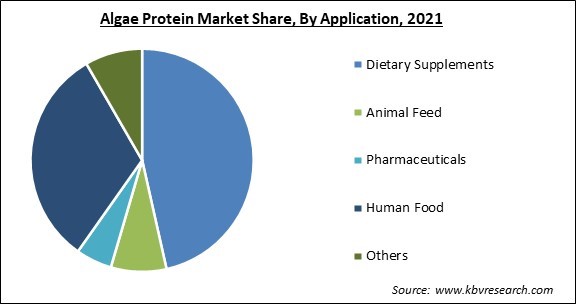 By Source, the Algae Protein Market is classified into Freshwater and Marine. The marine segment revenue registered a significant share in the algae protein market in 2021. Traditionally, marine algae, also known as seaweed, are consumed by humans, particularly in Asian nations such as South Korea and Japan. It is typically used as an ingredient or a side dish in a variety of meals and soups. Some types of seaweed are known to have comparable amounts of protein to other protein sources, such as soy, egg, milk, and meat.

Based on the Application, the Algae Protein Market is bifurcated into Dietary Supplements, Human Food, Animal Feed, Pharmaceuticals, and Others. The human food segment witnessed a substantial revenue share in the algae protein market in 2021. The beneficial qualities of algae protein, such as reducing allergies, staying stable at low temperatures, and adding fiber, should improve product demand. The need for processed food products is being pushed by a growing working population, increased urbanization, and population expansion; these factors should have a positive impact on the growth of the algal protein market.

Region-wise, the Algae Protein Market is analyzed across North America, Europe, Asia Pacific, and LAMEA. The North America segment procured a significant revenue share in the algae protein market in 2021. Dietary supplements and food are the leading application sectors in the North American market, which may be due to the increased interest in fitness among consumers in the United States, Canada, and Mexico. In addition, it is projected that the developing aquaculture industry would raise demand for the product throughout the projection period.

The global Algae Protein Market size is expected to reach $4.4 billion by 2028.

Awareness Of The Health Advantages Of Omega-3 Among Consumers are driving the market in coming years, however, Digestibility Issues With Algae Protein restraints the growth of the market.

The Freshwater segment acquired maximum revenue share in the Global Algae Protein Market by Source 2021 thereby, achieving a market value of $3.2 billion by 2028.

The Asia Pacific market dominated the Global Algae Protein Market by Region 2021, and would continue to be a dominant market till 2028; thereby, achieving a market value of $2.7 billion by 2028.