The Global Airborne Sensors Market size is expected to reach $12 billion by 2028, rising at a market growth of 5.2% CAGR during the forecast period. 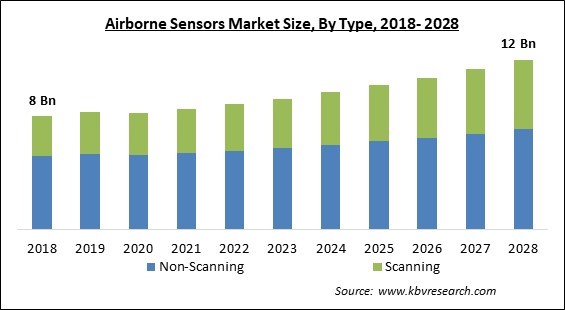 Airborne Sensing has a large fleet of twin-engine aircraft that can carry a variety of sensors. Because aerial mapping necessitates a wide range of capabilities, Airborne Sensing has grown to meet those needs. This comprises aircraft capable of slow flight at low altitudes, which allows for big-scale imaging, as well as aircraft capable of high-speed flying at high altitudes that enables rapid capture of photographs over a large region. The use of only twin-engine aircraft has a number of advantages. Airborne sensing is routinely used over huge swaths of unoccupied land as well as water.

Satellites, aircraft, and terrestrial close-range platforms are the most common platforms used by existing technology. There is a sector of new applications between aerial and terrestrial use, which are often experimental but, in certain circumstances, already well-established and practical. It is possible to obtain data with a resolution and precision that is comparable to that of aerial and terrestrial approaches. The usage of airplanes is sometimes limited by budget and administrative constraints. Other reasons for such uses include flexibility, precision, and scientific interest. These new technologies are capable of competing with traditional ones in some circumstances and have already hit the market.

The airborne sensors market was hindered due to the COVID-19 pandemic. Because of industrial closures and supply chain interruptions, the airborne sensor market was significantly hampered during the COVID-19 pandemic. This is primarily due to the supply chain disruption caused by strict lockdowns and the closure of many factories. However, government measures in order to counter the pandemic, as well as contributions from important companies in providing aerial photographs of the Covid-19 pandemic, are expected to drive the airborne sensor market forward in the coming years. Airborne sensors are used in a variety of applications and are continuously being improved. These sensors are very expensive, but they offer a lot of possibilities for gathering data from the air and using it for various purposes. These factors are allowing the market to recover at a faster rate.

Higher demand for surveillance drones during the COVID-19 pandemic

The COVID-19 virus has quickly spread around the world. To stop the virus from spreading further, most countries implemented a lockdown. Various people worldwide did not, however, follow the rules in several regions. As a result, law enforcement agencies devised a drone surveillance solution. Police departments all over the world have begun to use drones to track people's movements over large areas without resorting to force. Drones were first used for research in a number of developed countries across the world. Furthermore, a number of UAV manufacturers are working on customized drones that can detect COVID-19 symptoms in crowds.

Wide range of uses of these sensors

Once data from airborne sensors, or remote sensors, has been acquired, it can be reused and analyzed for a variety of purposes. Airborne sensors, for example, can collect data to survey a construction site. The same data, on the other hand, may be used to examine and plan new roadways. Alternatively, data acquired from forests to monitor wildfire risk could be utilized to track biodiversity. The reflected light is measured by airborne sensors, which can be natural sunlight or even a light pulse. Airborne sensors do not disrupt the scanned environment because this light is neutral to objects, vegetation, and people. 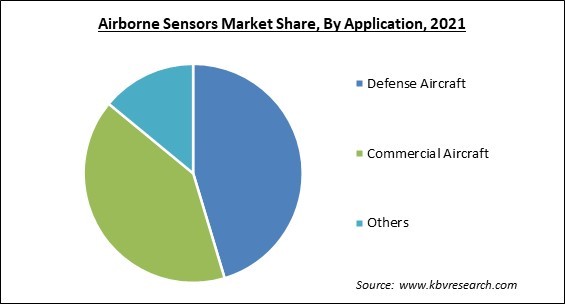 Although LiDAR is inexpensive when used in large applications, it can be costly when utilized to collect data in smaller locations. Sensors, cameras radars, and other components make up the aerial surveillance system. The modern and advanced airborne sensors have the ability to provide precise data. However, due to their sophisticated design, developing airborne sensors become very costly. Due to this, the utilization of these sensors in various small-scale applications is being reduced. Because the components are subjected to harsh weather conditions, the design is complex, which raises the cost.

Based on Type, the market is segmented into Non-Scanning and Scanning. In 2021, the scanning segment garnered a significant revenue share of the airborne sensors market. The increasing growth of the segment is owing to the low cost of this product. Airborne Laser Scanning is a measurement technology in which light pulses (usually produced by a laser) are fired from an instrument mounted on an aircraft and directed in a scanning pattern to the ground.

Based on Application, the market is segmented into Defense Aircraft, Commercial Aircraft, and Others. In 2021, the defence aircraft segment procured the largest revenue share of the airborne sensors market. Key market players who are growing in the aviation business and are adopting new and effective technology to develop airborne sensors for defense applications are majorly bolstering the growth of this segment.

Based on Regions, the market is segmented into North America, Europe, Asia Pacific, and Latin America, Middle East & Africa. In 2021, North America held a substantial revenue share of the airborne sensors market. This is mostly attributable to the region's defense sector's considerable investment in the development of advanced and next-generation airborne sensors by leading market players.