The Global Action Camera Market size is expected to reach $8.9 billion by 2025, rising at a market growth of 18.3% CAGR during the forecast period. The action camera market has been estimated to experience significant growth in terms of extensive application in recording action sports and activities. The development of travel industry and a growing number of travelers and adventure sports enthusiasts will fuel market growth in the years to come. Action cameras are capable of withstanding harsher climates during adventures, like climbing, bicycling, snowboarding, trekking, and skiing. Advances in film-making and increased need for special effects are anticipated in the coming years to fuel product demand. 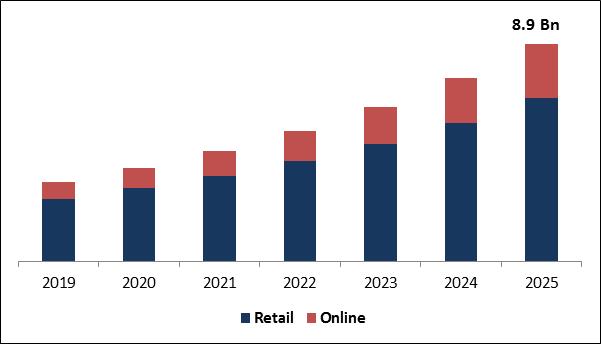 An action camera is more portable than a point and shoot or DSLR model. They can be placed anywhere, from a dash board to underwater, and can also be used to capture high quality videos and photos. Many action cameras are capable of recording high-quality 4k videos without any difficulty. They can also take excellent photos, due to their large sensors, which can be instantly transferred to a smartphone through WiFi. To record a comparable quality of videos, people usually carry a large sized camera, which is at least twice or thrice as expensive.

Based on Regions, the market is segmented into North America, Europe, Asia Pacific, and Latin America, Middle East & Africa. Asia Pacific is likely to see steady growth as the demand for an action camera with advanced lens and resolution features increases. Increasing spending on leisure, rising disposable incomes, adventure and sports activities, and the vast popularity of social media channels are major factors that trigger the demand for these devices. In addition, the commercial availability of cameras varieties along with the increasing presence of retail channels and e-commerce also boosts regional demand over the forecast period.

According to a new report published by KBV Research, The global Action Camera market size is expected to reach $8.9 billion by 2025.

Asia Pacific region is projected to record the largest market share in the Action Camera market during the forecast period.

The sports segment represented a higher market share, which can be attributed to an increase in the number of adventure sports and high media exposure.