The Global Accelerometer & Gyroscope Market size is expected to reach $3.6 billion by 2028, rising at a market growth of 5.1% CAGR during the forecast period.

An accelerometer is referred as a sensor that is used to detect the linear motion of any item in one direction and measures the device's overall acceleration, which encompasses the static acceleration caused by gravity when the object is not moving. A gyroscope, on the other hand, is a sensor that detects the angular motion of a device over each axis. Applications for accelerometers and gyroscopes include automotive, navigation, and consumer electronics. These sensors are commonly employed in airbags in order to activate them in the event of a collision, in gaming consoles to improve motion control, in numerous phones to recognize touch gestures, and in electronic gadgets to automatically change the orientation of any screen when they are turned.

Additionally, an accelerometer is a type of sensor that monitors the physical quickening of a device in relation to a one-way free fall. In most modern gadgets, an accelerometer is a tri-hub with three dedicated units positioned with each route to evaluate acceleration along with them. Gyroscopes detect rakish movement along a single rotational axis. Accelerometer and gyroscope only provide information about a device's development, whether in a straight or rotational direction, Nevertheless, they do not provide information regarding the device's introduction. The inertial route framework is used by a combination of gyroscopes and accelerometers in complex frameworks such as space vehicles, satellites, and rockets.

Individually, the accelerometer and gyroscope give various significant benefits to the navigation system, nevertheless, each has a range of data ambiguity. In many applications, it is preferable to have both of these sensors gathering data on the same phenomenon and integrating their output data. This is possible using a sensor fusion method that combines sensory input from several sources to produce less ambiguous information. It's best to have both the 3D accelerometer as well as 3D gyroscope functions in the same device when connecting the data. A pedometer, gesture detection, motion tracking, and tilt functions are all appropriate uses.

Additionally, due to their usage in various military arrangements, the utilization of accelerometers and gyroscopes is increasing. Worldwide military expenditures remained high in 2019 and various defense organizations are set to deploy the most advanced technology as a result of increased spending. Increased demand for consumer electronic gadgets, increasing military spending, and an increase in the number of vehicles on the road are some of the major factors influencing the accelerometer and gyroscope market's growth. Increased manufacture of autonomous vehicles, on the other hand, is likely to open up the lucrative potential for the sector. 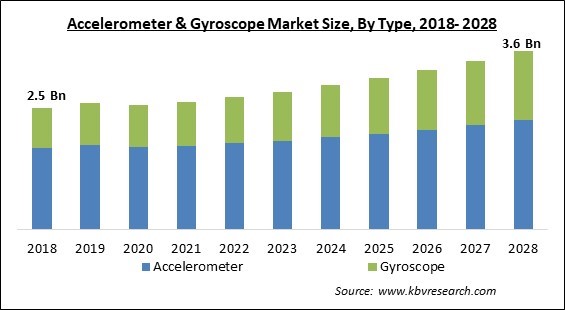 The COVID-19 pandemic caused a severe impact on various economies all over the world. Several businesses were significantly devastated as a result of the outbreak of the COVID-19 infection. In addition, the governments of several countries were forced to impose lockdowns in their nations. As a result, the manufacturing units of numerous goods were temporarily shut down. Moreover, these lockdowns also caused a major disruption in the supply chain of various goods. Further, the COVID-19 led the worldwide healthcare industry to a significant failure due to the shortage of beds and oxygen in hospitals.

Increasing demand from the automotive sector

The MEMS accelerometer and gyroscope are critical components in increasing car safety features. With the advancement of autonomous driving, demand for these sensors is likely to increase for safety-related applications, providing new market potential. Automotive manufacturers are being pushed to use the most up-to-date MEMS sensor-based systems due to stringent requirements. In addition, the demand for inertial MEMS sensors is being driven by crash sensing for airbag control. MEMS-based accelerometer sensors with a temperature range of -40 C to +125 C have been developed by companies and are appropriate for enabling passive safety during a crash. Automotive-grade MEMS sensors are available to fulfill the current sensor demands of modern cars.

One of the major applications in which accelerometers and gyroscopes are majorly being employed is the defense and military sector. The adoption of technology across this sector is constantly increasing. The defense sector is expected to showcase a strong market demand for accelerometers due to the growing adoption of high-acceleration accelerometers in missiles with small-diameter, automated aircraft, and underwater navigation systems, as well as the growing benefits of high-end MEMS sensors in military applications. In addition, high-end MEMS accelerators and gyroscopes are utilized in inertial navigation applications to estimate the direction as well as the speed of military applications like ships, aircraft, submarines, guided missiles, and spacecraft.

Difficulties in manufacturing and maintenance of accelerometers and gyroscopes

Along with a significant number of advantages, there are several constraints and hurdles that would impede the overall market growth. Lack of competent personnel, as well as a lack of norms and protocols, is hampering the market's growth. In addition, due to the limited precision of accelerometers in particular industries, the accelerometer market are facing various major problems. In complicated systems like space vehicles, satellites, and missiles, this causes major challenges because the inertial navigation system is employed in conjunction with accelerometers and gyroscopes. Moreover, frequent maintenance and the costs connected with it are possible barriers to the accelerometer & gyroscope market growth. 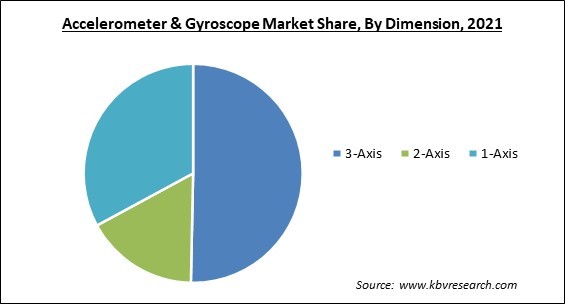 Based on Type, the market is segmented into Accelerometer and Gyroscope. In 2021, the accelerometer segment acquired the largest revenue share of the accelerometer and gyroscope market. The angle the gadget is tilted with regard to the ground can be determined by measuring the volume of static acceleration due to gravity. Users can examine the way the device moves by monitoring the amount of dynamic acceleration. At first glance, monitoring tilt and acceleration does not appear to be particularly intriguing. Designers, on the other hand, have come up with a slew of innovative methods to employ them to create truly valuable goods. This factor is augmenting the growth of this segment.

Based on Industry Vertical, the market is segmented into Consumer Electronics, Automotive, Aerospace & Defense, Industrial, Healthcare, and Others. In 2021, the consumer electronics segment witnessed the maximum revenue share of the accelerometer and gyroscope market. Because accelerometers and gyroscopes are used in cell phones, tablets, and notepad PCs, the demand for these instruments across the consumer electronics sector is increasing. In addition, the employment of accelerometers and gyroscopes is being propelled by the increasing penetration of smartphones all over the world. If a portable PC falls off at that point, an accelerometer placed close to the hard circle detects the fall and prevents the read head of the hard plates from breaking by turning it off. Hence, these products are widely being integrated into consumer electronics products.

Based on Regions, the market is segmented into North America, Europe, Asia Pacific, and Latin America, Middle East & Africa. In 2021, North America garnered a significant revenue share of the accelerometer and gyroscope market. Because of its diverse uses in the automotive, healthcare, and defense industries, North America contributes to significant market growth. MEMS sensors are projected to be in high demand in the region due to their widespread use in innovative healthcare equipment like Bio-MEMS. Government bodies in the region are also heavily investing in MEMS-based microfluidic chip production facilities.

The global accelerometer & gyroscope market size is expected to reach $3.6 billionn by 2028.

Increasing demand from the automotive sector are increasing are driving the market in coming years, however, difficulties in manufacturing and maintenance of accelerometers and gyroscopes growth of the market.

The 3-Axis segment acquired maximum revenue share in the Global Accelerometer & Gyroscope Market by Dimension in 2021, thereby, achieving a market value of $1,771 million by 2028.

The Asia Pacific is the fastest growing region in the Global Accelerometer & Gyroscope Market by Region in 2021.