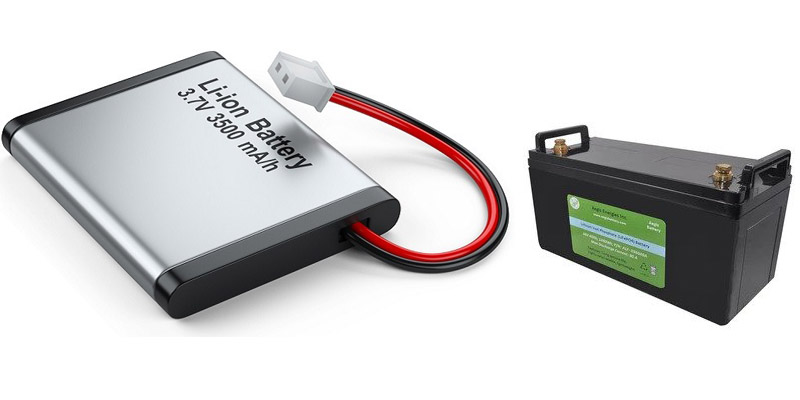 The ability of the lithium-ion to alter over negative terminals to positive anodes when the battery is in use or it is being charged. These batteries are light-weighted and compact in size due to its packaging design. It has good work efficiency. Rechargeable Poly Lithium-Ion Battery is used in electronic gadgets, electric vehicles (EV), digital cameras, hybrid electric vehicles (HEV), military and aerospace, etc.

The Rechargeable Poly Lithium Ion Battery is available in different shapes. It can be either cylindrical or prismatic in shape.

Electric vehicles that use rechargeable poly lithium-ion batteries are gaining attention because of the need for energy-efficient, and environmentally friendly products. Increasing customer inclination towards such kind of batteries is continuously increasing.

As there is unique power need in the batteries that are used in industrial areas, the choice of the battery become an important factor. Poly Lithium Ion Battery are energy efficient that is why it is used in video and digital cameras, medical devices and other equipment.

As the demand for this type of batteries is continually increasing, this has resulted in vendors and researchers, and manufacturers to be more focused on improving the energy density, durability, operating temperature, safety as well as the reduction in the cost of the batteries.

Since Poly Lithium-Ion Battery is less toxic for the environment and produces non-hazardous waste, they are considered as eco-friendly. The introduction of electric vehicles and the use of Poly Lithium-Ion Battery in such vehicles is reflected as one of the appreciable steps taken by the governments of both developing and developed nations. The necessity for eco-friendly and energy-efficient products has resulted in an increasing focus on electric vehicles (EV).

The Rechargeable Poly Lithium-Ion Battery Market has been witnessing rapid growth as there is an increasing demand for electric vehicles and grid storage. Since these batteries have light in weight and give high-energy density solutions. The rise in the sales of electric vehicles and change in the preferences of clients is estimated to boost the global market for rechargeable poly lithium-ion battery.

Due to the properties like high energy density, an excellent load, and low temperature, these Poly Lithium-Ion batteries became a dynamic source of power for laptops, mobile phones, and other portable equipment. The Global Rechargeable Poly Lithium-Ion Battery Market has been expected to rise at a growth rate of 6.9% CAGR over the forecast period.

Eggshell Membrane Not a Waste but full of Protein and Nutritions