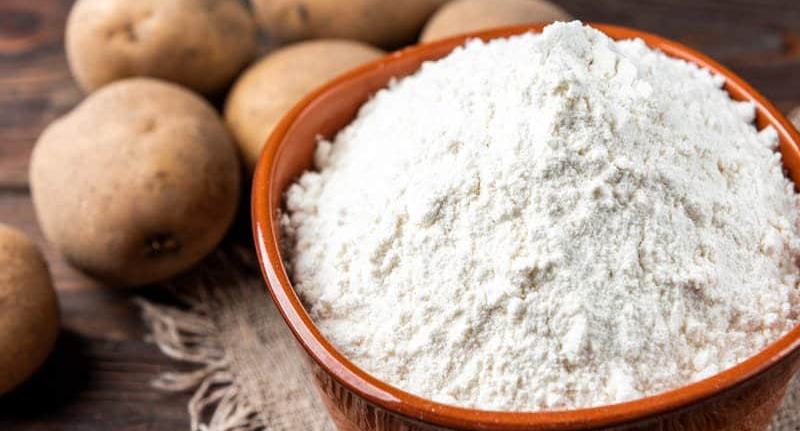 Potato starch is a potato starch that has been isolated. Starch is a common ingredient in a variety of cuisines since it dries to a light, powdery, flour-like consistency.

Potato starch is manufactured by crushing raw potatoes and separating the starch grains from the damaged cells. The starch is washed and dried after that. The potato starch dries to a white, powdery texture that resembles flour. Potato starch can be used as a gluten-free plain flour substitute in some recipes because it is gluten-free.

For fried meals, potato starch could be utilized as a coating. It can be used to cover poultry, fish, and veggies before frying.

The potato starch coating can provide the goods with a golden and crispy outside layer throughout the frying process.

Potato starch is often used as a thickener in a variety of cuisines since it absorbs water nicely. Extreme heat, however, may cause the starch to break down, preventing it from collecting enough moisture and so inhibiting the thickening effect. As a result, slowly cooking the starch before gradually adding it to sauces is recommended.

Soups and gravies, pie fillings, sauces, casseroles, and stews are all made with potato starch as a thickening agent.

Because potato starch is gluten-free, it can be used as a gluten-free flour substitute in baking recipes.

However, too much potato starch in baked goods might result in a dry, crumbly texture. As a result, it can be combined with other starches in baking. Potato starch is commonly used in baking recipes such as muffins, quick bread, and gluten-free flour mixtures.

According to a 2017 study, eating resistant starch makes people feel fuller after a meal. For six weeks, participants in the study consumed 30 g of resistant starch each day. In persons who were overweight in the past, this reduced the number of hormones that produced hunger.

People who ate resistant starch had more chemicals in their bodies, which made them feel less hungry in the morning.

Resistant starch in the diet may help weight loss efforts by increasing the feeling of fullness after a meal and the amount of time a person feels full.

Insulin sensitivity may be improved by using potato starch

Several studies have shown that resistant starch improves insulin sensitivity. Raw potato starch, which can be sprinkled on food, contains this type of starch.

During a 2012 study, overweight men consumed only 15–30 grams (g) of resistant starch per day. They had better insulin sensitivity than individuals who had not consumed resistant starch-containing foods.

People with higher insulin sensitivity have a lower risk of obesity, diabetes, and heart disease. It's also worth noting that the results of the female participants in this study were not the same as the men. More research is needed to understand why, according to the researchers.

Beneficial for digestive and colon health

The beneficial bacteria in the colon are fed as resistant starch ferments and change into short-chain fatty acids.

Butyrate is a short-chain fatty acid created during this process that is essential for colon cell survival. Butyrate can help to reduce inflammation in the colon, which can minimize the risk of developing a number of digestive issues.

It may, in theory, reduce a person's risk of developing inflammatory bowel and colon disorders like IBD, colorectal cancer, constipation, ulcerative colitis, diarrhea, and others.

Could be harmful to digestive health

You may have temporary digestive troubles such as bloating and gas when you first start incorporating resistant starch recipes with potato starch into your diet. Potato allergies are uncommon; however, you should avoid potato starch if you have a nightshade allergy or intolerance.

The two basic components of potato starch are amylose (20%) and amylopectin (10%). (80 percent). Amylose is an undesirable component since it causes goods to gel when added to them.

Potato starch is a common ingredient in a wide range of recipes. It thickens sauces effectively, can be used to cover dishes when fried, and can be used as a gluten-free baking component. Two further potential health benefits of potato starch include better colon health and insulin sensitivity. It may also help with weight loss.

The Global Potato Starch Market size is expected to reach $4.9 billion by 2027, rising at a market growth of 3.5% CAGR during the forecast period.