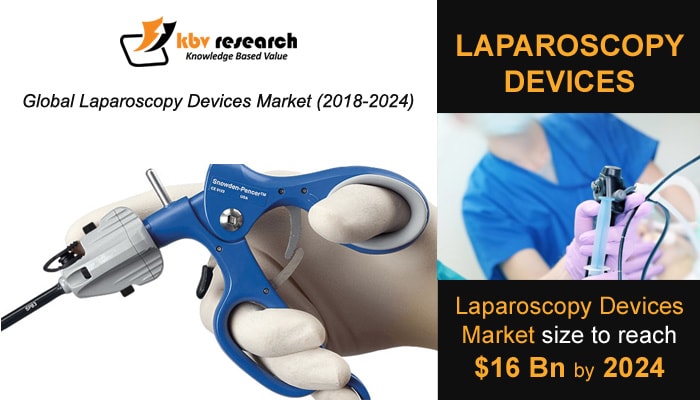 Laparoscopy is a minimally invasive operating technique carried out by keyhole incision, especially for the abdominal organs. Targeted laparoscopic treatment areas include bile duct, column, liver, pancreas, etc. Due to the advent of technological advances in energy equipment and laparoscopes, demand for laparoscopy devices has increased considerably over recent years.

The patients with laparoscopic surgery have several advantages versus the more frequent, open operation. These include decreased pain because of smaller incisions and shorter recovery periods. A long fiber optic cable system, which enables the view of the affected area to be viewed by snooping onto the cable from a remote but easier to access location, is the key element. Due to this, there has been a fast adoption rate on the laparoscopy device market. The market for laparoscopic devices is driven by the growth in morbid obesity that leads to increased demand in bariatric surgery, such as gastric bypass, gastrectomy, and laparoscopic gastric banding. Moreover, emerging countries are expected to increase healthcare expenditure, creating new opportunities for market development.

A laparoscope is an instrument that allows structures to be seen inside the abdomen and pelvis. In the abdomen wall, a small operational incision (cut) allows the laparoscope to enter the pelvis or abdomen. The same incision or other small incisions to insert probes and other instruments can be used to push a range of tubes. This allows for a number of operations without the need for a large operational incision. Today, almost every part of the body with a laparoscope including the joints of the body can be seen.

The energy devices industry is the fastest evolving industry currently. This is because progress on energy devices used to laparoscopy and the large-scale inclusion of these devices in laparoscopic applications has been increased. Furthermore, during the forecast period, the laparoscope segment is expected to grow rapidly. Monopolar energy is witnessing a widespread adoption in electrosurgical modality because of its versatility and clinical effectiveness.

The robot-assisted surgical systems for laparoscopy are projected to grow with the highest level of growth rate due to the ability of these systems to make minimally invasive operations easier. The global demand for laparoscopic surgeries has been increased by robotic- based surgery for hysterectomy, prostatectomy, nephrectogenesis, the removal of fibroid and others. The solution to underdeveloped countries is a robotic operation, with several remote machines at remote locations operated by a single central hospital. The potential for robotic surgery was also strongly influenced by the military in order to provide mobile medical services while safeguarding trained doctors.

Understanding the need for Laparoscopy Devices

According to a recently published report by KBV Research, one of the leading market research companies, the worldwide market for Laparoscopy Devices is anticipated to reach $16.0 billion by 2024, mounting at a CAGR of 6.4% during the forecast period. The application of bariatric surgery accounts for approximately one-fifth of the share in 2015, driven by an increased range of surgeries such as the gastric bypass, sleeve gastrectomy, and stomach banding. The rising obese patients are expected to increase the likelihood of related disorders such as cardiovascular diseases, cancer, osteoarthritis, and diabetes, for which the demand for laparoscopic based bariatric surgery worldwide will increase.

The Evolution of Laparoscopy devices

In terms of the concept of laparoscopy, postoperative pain minimizes, recovery times get accelerated, and the improved visual field for the surgeons gets maintained. In the last two decades, a variety of surgical subspecialties, including gastrointestinal operation (including the bariatric procedure for morbid obesity), gynaecologic surgery and urology, have been taken into account by improving patient outcomes. The method has proven beneficial for the reduction of postoperative morbidities such as wound and incidence (particularly in morbidly obese patients), based on numerous randomized controlled trials. It is now considered safe to operate on cancers such as colonic cancer.

Hospitals have high market potential for laparoscopy devices market growth as the demand for minimally invasive surgeries (MIS) has increased and government initiatives to improve health care facilities have surged. It is estimated that the impact of driving factors will exceed the limitations. In addition, new markets are emerging and robot-aided technologies are likely to increase in the near future and offer new opportunities for growth. The key factors that drive the global laparoscopy devices market include a rise in the number of obese population, growth in laparoscopic-based bariatric surgeries for weight reduction, and an increase in technological advancements pertaining to these devices.

5 things you should know before entering Cryptocurrency world

The Best features of Neobanking is now