How have advancements in biochips boosted their adoption? 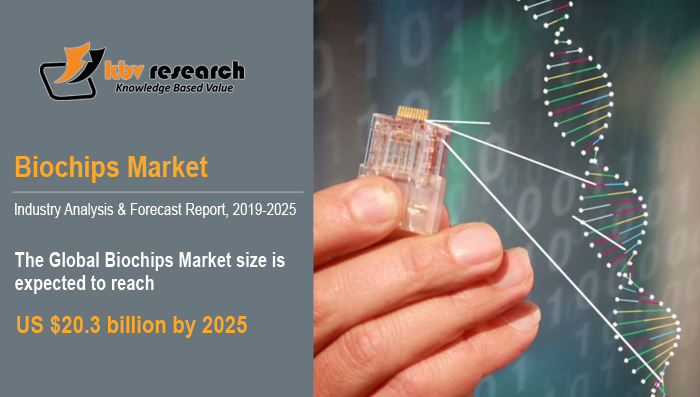 Science and medicine background has helped to break through new developments in biochip technologies that also combine next-generation sequencing (NGS) with actual problems. Since biochip technologies are being used in sequence engineering, the key advantages of biochips are their scalability and performance. With the benefits of biochips, NGS has favored scientific breakthroughs and technological advances in medicine. All current NGS platforms, nevertheless, require nucleic acid preparation at certain levels, making it difficult to examine biology-specific systems of interest.

Biochips are miniaturized medical instruments used for simultaneous biochemical reactions in molecular laboratories. Such tools can easily screen multiple biological analytes for various applications. These applications may include diagnosing disease and detecting harmful biological agents in systems. Their design is based on technologies of microarray and microfluidics. Digital microfluidic biochip has emerged as a highly efficient chip among the two and has gained considerable momentum in the biochemical industry.

There is a transponder and a scanner in the Biochip. There are two types of transponders, passive transponders, and active transponders. The active transponder has no power or battery, while it is passive only when it is triggered by a small electrical charge from the user. This transponder contains four components: an antenna coil, a microchip, and a tuning capacitor. The reader consists of an "exciter" coil and generates an electromagnetic field utilizing radio signaling. It provides the necessary energy to make the biochip.

Why and how are they used?

Biochip technologies are widely available in the fields of pharmacogenomics, biochemistry, proteology, microbiology, clinical pathology, and DNA analysis. Biochips can be used for screening analytes for indications of biological warfare, drug discovery, and drug development. This can be done for molecular disease diagnosis and other diseases, for personalized medicine, and for generally detecting a wide range of biomolecules in specific applications. Biochips also find greater use in skin-on-a-chip applications.

Biochips are primarily being used in the area of biomedical and biotechnological studies. As medical technology advances, the use of proteomics biochips like microarrays has increased. The advantages of protein biochips include low sample intake and their inclination to miniaturization. For instance, protein microarrays can display multiple proteins continuously, which translates into the ability to process thousands of samples in tandem.

The feature of microarrays is important for a proteome-wide evaluation. For proteomics, biomarkers and drug discovery are widely used. Therefore, the increase in the need for personalized medicine for diseases allows the industry to grow. The biochip demand is strongly influenced by factors including increased use of biochips in cancer treatment and diagnosis, increasing demand for personalized medicine, and rapid technological advances.

Biochips are essentially small laboratories designed to function within living organisms and drive DNA sequencing technologies of the next generation. This combination can address critical biological problems, such as single-cell, rare-cell, and rare molecule analysis. These problems are otherwise difficult to be carried out by next-generation sequences alone.

Now that biochip technology's scaling and throughput capacity has emerged, the upcoming trend in biochips may include being able to deliver applications across a broad spectrum— from detecting rare bacteria to population-based clinical studies. The value of both technologies would increase exponentially when biochips reach next-generation sequencing. If biochips that allow single-cell analysis have prevailed over the past decade, there are more biochips with different functions that are now going to reinvent the biofield— including biochips for drug screening.

Doctors have just earned an impressive new device to add to their arsenal in their fight against cancer. By using their auto-antibodies of cancer patients as a diagnostic tool, doctors might be able to tailor therapies based on their profile of autoantibodies. This technology was designed to take advantage of the information found in the biology of the patient.

This makes this approach special is that researchers can use the patient's actual speech as a way of obtaining better diagnostic information which can be used by physicians to better understand and fight cancer. For example, when a biochip designed to detect upper respiratory diseases is exposed to a swab taken from the mouth of a person, the protein or nucleic acid binding patterns in the array cause the dots to "light up" when scanned and analyzed with a computer. Computer algorithms decode the biochip-generated dot pattern, measure the statistical likelihood of each possible infection, and provide the doctor with this data.

Biochips market is growing with recent developments in biochip technologies that tie next-generation sequencing (NGS) to real-world issues that have encouraged scientific and medical breakthroughs. Since biochip technologies have been used in sequencing technologies themselves, biochips ' main strengths lie in their scalability and efficiency. NGS has facilitated ground-breaking scientific discoveries and technical breakthroughs in medicine through the advantages of biochips.

All existing NGS platforms, however, include the preparation of nucleic acids in a certain range of concentrations, making it difficult to study intriguing biological systems. In specific, several biology and medicine's most interesting questions, including single-cell and rare-molecule analysis, require strategic biological sample preparation to be answered. Answering these questions is essential because in a complex biological system every cell is different. The global biochips market is expected to rise at a market growth of 11.2% CAGR in the near future.