Amazon, Apple and Google Tied the Wings of Parler Services 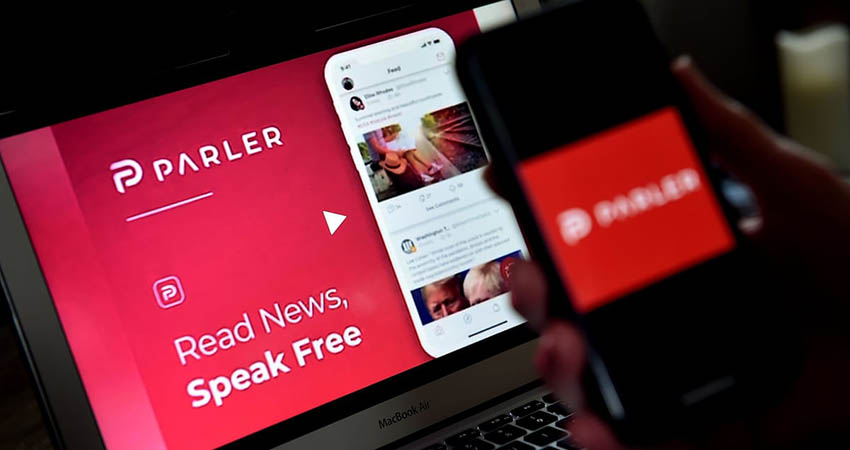 Following that many Trump supporters and the right-leaning users shifted to Parler. The shift helped Parler to be the most downloaded free app on Apple App Store in the US. People shared problematic information on Parler which promoted and glorify violence.

Succeeding that big giants like Apple, Amazon, and Google suspended Parler from their app stores and web hosting services. After the suspension of Donald Trump’s account from Twitter, many right-leaning users moved to Parler for their communication.

What actually Parler is?

Parler is a social medium platform with the description of being the world’s premier free speech platform. Parler is an alternative platform for Twitter as per the users. According to the platform, users can speak freely and express themselves openly without any fear of being de-platformed.

With the suspension of U.S President, Donald Trump’s account, many other accounts were also suspended or deleted content or accounts who were trying to provoke or promote violence. So, many trumps’ supporters shifted to Parler to express their outrage.

This shift helped Parler to gain more users. Parler provides a platform for its user to express their opinions and share information without any fear. This feature attracted users whose accounts get suspended by the mainstream social media platform.

The reason behind the suspension of Parler

There are many right-leaning supporters who were using the platform to communicate and spread their outrage. Several people, who participated in the Capitol Hill Siege, were also using Parler. This is because of the restrictions imposed by Twitter on their platform, which shifted from Twitter to Parler.

Companies who have suspended Parler

A letter sent to the developer of the Parler app by Apple which was published by the New York Times. In that letter, the company said that Parler has not taken any adequate measures to address the spread of dangerous and objectionable content on its app.

Amazon has also given a similar reason to ban the platform and mentioned that Parler has violated its terms of service. The company also suspended Parler from its web hosting service. Amazon Web Services provides space to the websites on a physical server to store data and information.

AWS further suspended all its services to Parler in response to their policy violation. Amazon sent a letter to the company and addresses its content as a “very real risk to public safety” and therefore suspended its services.

Similarly, Google also banned the Parler app on their app store due to the failure of the platform to moderate the dangerous content posted by the users to incite violence.

What was the reaction of Parler on the suspension?

In the reaction to the suspension of Parler by Apple, Amazon, and Google, the CEO of Parler, John Matze lashed the companies. He said that it was a coordinated effort of the companies as they know that Parler’s option would be limited. In addition, it would inflict the majorly damaged right as Trump was banned on other social media platforms.

John Matze further added that these giants coordinately attacked to kill the competition in the market place. Although, they are trying to get the platform back on the internet and also find another company to provide web services. But it will take time and cost them more. This incident severely affected Parler’s business and restricted its growth.

According to the lawsuit, AWS’s decision to terminate Parler’s account driven by political animus. This action aimed to reduce competition in the microblogging service market to benefit Twitter. Therefore, AWS is violating section 1 of the Sherman Antitrust Act in combination with Defendant Twitter.

The lawsuit further added that AWS has also breached its contract with Parler. Under the contract, AWS needs to provide a thirty-day notice period before terminating their services. The lawsuit also states that AWS is committing deliberate interference with prospective economic benefits given the millions of users estimated to sign up in the nearby future.

The lawsuit and the CEO of Parler have stated many things as a response to the suspension of their app. But it will more time for Parler to stand strong again with different aspects and plan to cope up with these incidents.

The riots which took place at the US Capitol have multiple effects. Every part of the world is condemning the violence. Social media platforms witnessed increasing posts and tweets to express their opinions on violence. Thus, it became of utmost importance to take action against any information that promotes more violence in this sensitive situation.

As a responsibility, many social media platforms took action by removing the information, posts, or tweets from their platforms. However, they have also suspended accounts that glorify and promote violence in any form. Under this, Twitter suspended US President Donald Trumps’ account.

Parler, a social media platform created a buzz, when Donald Trumps’ supporters and many riot participants used Parler. Through Parler’s platform, rioters incite violence and in response to Parler’s inability to stop the spread of problematic content, big giants banned the app. Amazon stopped availing its web service to Parler and in response to this, Parler sued Amazon.

All these things affected the market of Parler. As per the CEO of Parler, they are trying to get back on track as soon as possible. But it will cost them more with time and money until they find another provider to continue their web service.